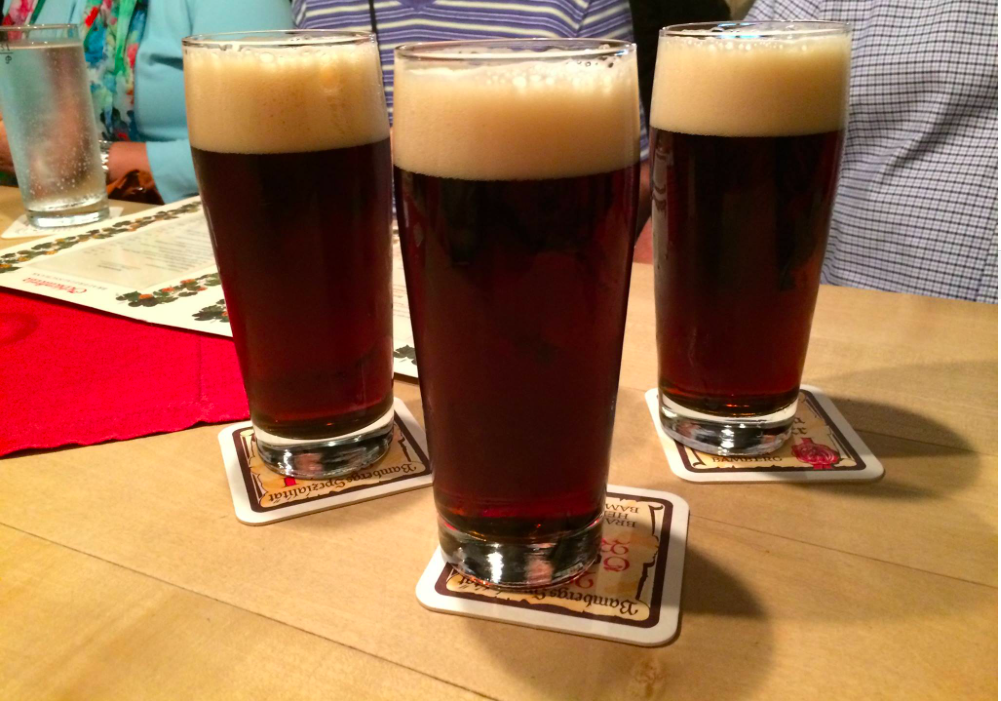 I love all those nouveau American hop bombs and porridge-thick New England IPAs just as much as the next guy.

But the reality is that the world’s best beer has been around for centuries. And it boasts a story, a tradition and a deep, rustic, full-flavored perfectly brewed complexity you simply don’t find in today’s largely raw, unfinished, under-attenuated American IPAs.

The beer is called Schlenkerla Marzen from Brauerei Heller-Trum. It’s a smoky Franconian rauchbier (literally, smoked beer), and its brewed in Bamberg, Germany in northern Bavaria. Bamberg is a UNESCO World Heritage site, arguably the most beautiful little medieval city in Europe and certainly on the short list of world’s greatest brewing cities.

The Franconia region (Franken, in German) is known for its dark rustic lagers, such as rauchbier and kellerbier. And Schlenkerla’s rauchbier and its flagship Marzen in particular is, for my money, the single greatest beer in the world.

Here are eight reasons why Schlenkerla Marzen is the world’s best beer:

1) Rauchbier is a rare vestige of age-old brewing tradition when wood-fired malts imparted all beers with smoky flavor. This tradition died everywhere else with the rise of modern heat sources. Schlenkerla committed itself to the old ways and has done so masterfully.

2) Schlenkerla has been making rauchbier since 1405. That’s 613 years ago, for those of you keeping score at home. You get pretty good at brewing beer after a while.

3) The smoked malts impart a deep, rich complexity in rauchbier you simply can’t get from any other ingredient or method. This is truly unique, beautiful, flavorful beer.

4) Despite its smokiness and full flavor, Schlenkerla rauchbier is an extraordinarily clean, easy-drinking, even crushable beer. No beer in the world combines rustic full flavor with that exquisitely perfect uniquely German beer-making skill.

5) The Heller-Trum brewery is STILL a family-run operation. Matthias Trum is, I believe, Schlenkerla’s 15th-generation brew master. That’s a whole lot of institutional brewing memory from perhaps the world’s First Family of Brewing.

7) The Schlenkerla pub in the heart of Bamberg is one of the prettiest places in the world to drink beer. Its cozy Bavarian hunting lodge vibe creates a warm, inviting atmosphere hard to find in a sleek new American brewery taproom. The vibe helps the beer taste better. It really does!

8) Schlenkerla pours its beers from these super-old-school oak barrels tapped with a copper spout. Nothing better than sitting in the Schlenkerla beer hall when they roll out another barrel of delicious smoky rauchbier and tap it right there before your eyes! Any beer tastes better amid that awesome old-school vibe, even beers as naturally awesome as Schlenkerla rauchbier.

Schlenkerla makes other beers besides its flagship Marzen, including a sweetish Urbock, a wheat beer and a clean, non-smoked Helles Lager, which is simply gorgeous!

Schlenkerla is not the only rauchbier brewer in Bamberg. You can also get rauchbier at Spezial and sometimes at the pilot brewery at Bamberg’s world-famous malthouse, Weyermann (where they also experiment with American-style IPAs right there in the heart of Franconia). I believe Kaiserdom has served rauchbier in the past, but not 100 percent sure.

Bamberg boasts 10 breweries, almost all within walking distance, making it one of the world’s bucket-list destinations for beer lovers everywhere.

A tribute to an American culinary icon, the late, great Alumni Cafe