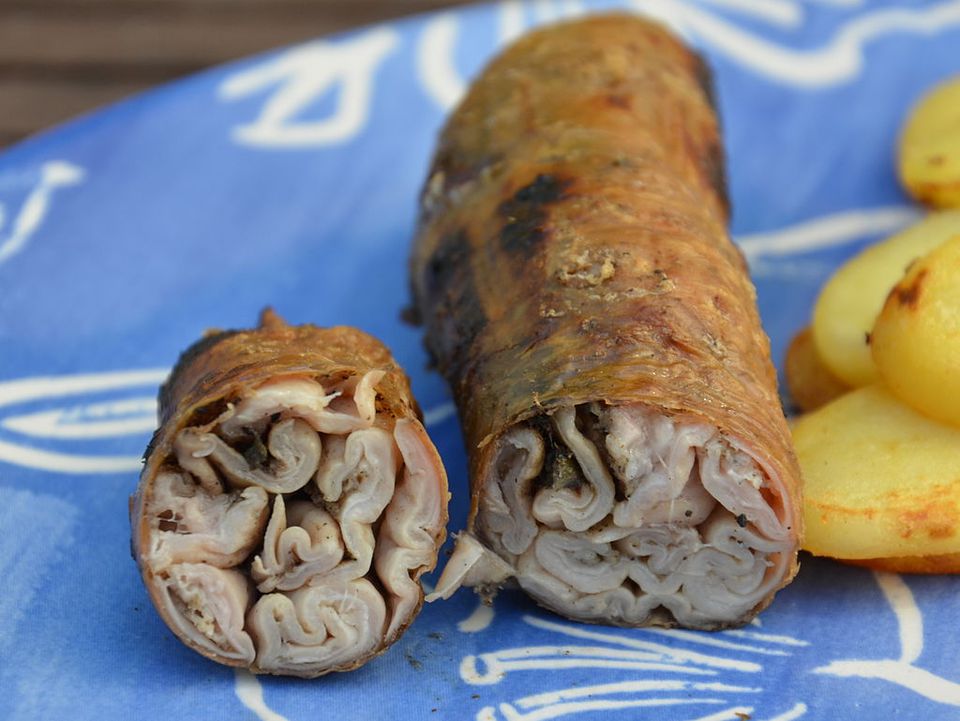 If you’ve heard the phrase “lips and assholes” to describe the rumored filling behind a cheap American hot dog, you have a pretty good idea of what original andouille is all about.

But at least the rumored lips and assholes in a ballpark frank are emulsified to be edible, flavored with spices, steamed or grilled, stuffed inside a bun and slathered with mustard, relish and onions. Yum!

Not so much with original andouille. What you see is what you get, and what you get is pretty much straight out of the pig’s innards. That’s right people, the proverbial lips and assholes.

Andouille in America is largely associated with Cajun country. But Vire is so closely tied to its iconic sausage that images of andouille appear on highway signs outside the city.

These signs are typical of French highways, denoting major cultural landmarks. They might show a battlefield or a cathedral or a famous artist. In Vire, the most famous cultural icon is andouille.

Louisiana andouille is typically coarse-ground pork with some combination of Cajun seasonings, paprika and other spices that give it a reddish hue and some of that typical heat.

The fresh version of andouille is basically a hog casing filled with fresh pig innards and then lightly grilled. Little additional flavoring. Just the yummy aroma and taste of fresh softened pig intestines!

I was in a restaurant in Vire called Chez Maman when the owner proudly brought over a plate of her fresh andouille. I honestly had trouble eating it. And I’ve been a professional eater for 25 years, consuming everything from unidentifiable Asian street food to crunchy dried insects for various stories.

I was like a little kid pretending to eat all his vegetables by hiding them in the mashed potatoes or feeding them to the dog. I powered through as much of the chewy lips and assholes as possible. I think I hid some of the sausage in my napkin.

Glad for the experience. But I didn’t want to embarrass the owner by vomiting over her treasured traditional sausage.

Fresh andouille is a little hard on the eyes and hard on the palate for most modern consumers. But it is pretty much what people ate back in the day when we consumed every part of the animal out of necessity.

There is a cured and smoked version of andouille that’s partially emulsified, more flavorful and more palatable. You can still make out lines of offal. But it’s definitely tastier and easier on the eyes. Savor some with a bottle of delicious, effervescent spontaneously fermented Norman cider.

You’ll find andouille all over Vire and it appears to come in many different varieties. Definitely worth the trip for the adventurous foodie or Francophile.