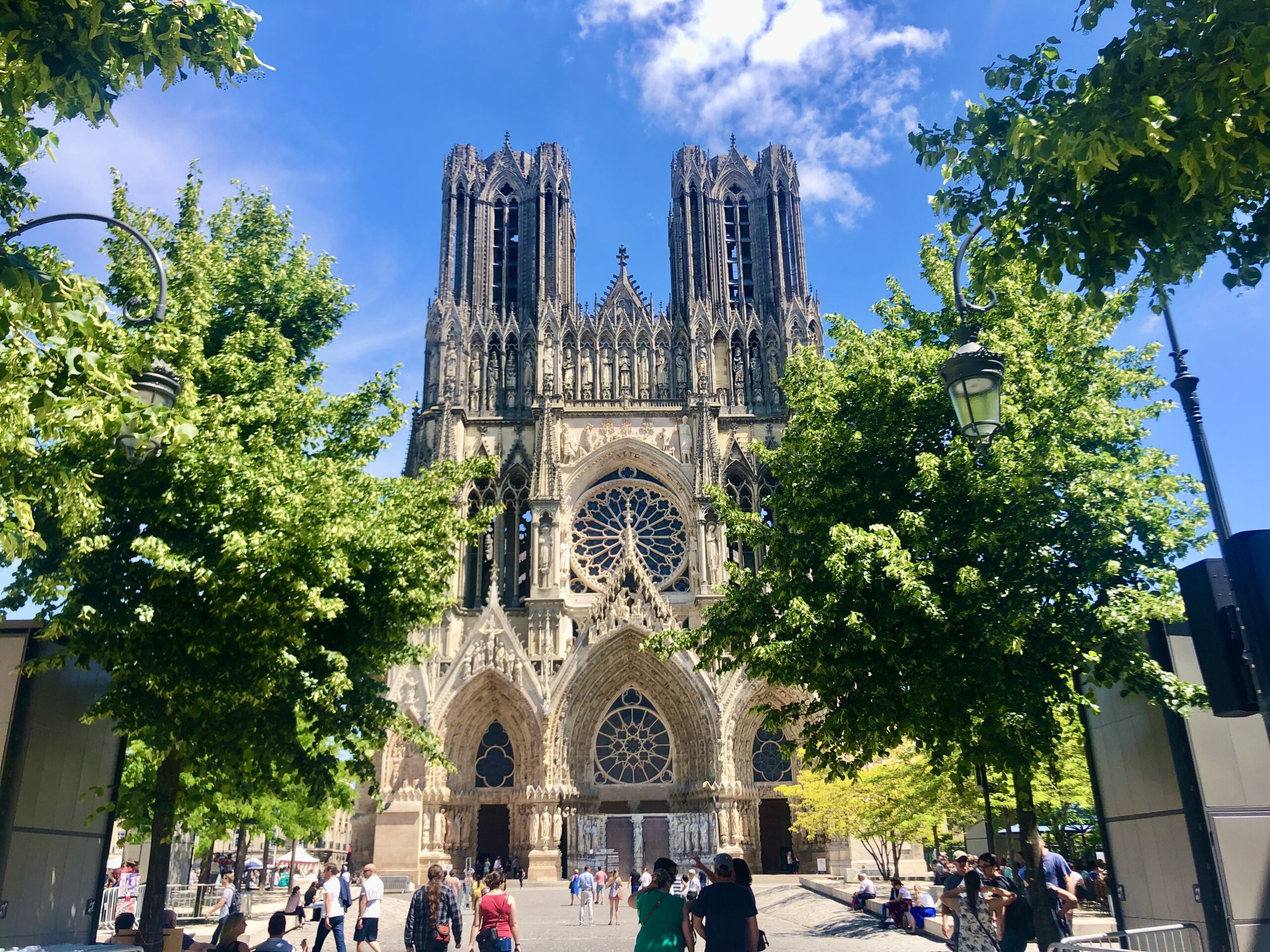 May 8 is the “official” end of World War II in Europe, celebrated as the day Germany surrendered to the Allies, ending six years of ravage on the continent. It’s called V-E Day (Victory in Europe) in the U.S. and the U.K.

But in reality, the war in Europe ended 75 years ago today, as the German High Command signed the documents of surrender on May 7, 1945 in Reims, France – which happens to be home the world’s most famous champagne makers.

Reims is a REAL cool little city, worth a day or two, with an amazing history that pre-dates Caesar’s conquest of Gaul (France). I’ve read that the Remi people who occupied this part of France in ancient times allied with the Romans. So they and their city were given favored status among the conquered tribes of Gaul.

You can see a marker today on the floor of the amazing Reims Cathedral, one of the most majestic in all of Europe, signifying the spot where Clovis was baptized in an earlier church on the same footprint.

Clovis started something of a regal trend for Reims: 25 kings of France were coronated in the Reims Cathedral from the 13th to 19th centuries, while the city was liberated from English control in 1429 by an army led by none other than Joan of Arc. That’s some pretty heavy-duty history! All of it gives Reims a special place in both French and Christian lore.

You can tour the breathtaking cathedral and then sit outside drinking bubbly fresh from any of the local wineries while marveling at the cathedral’s powerful Gothic architecture. Thousands of stone figures are carved into the building, telling stories of the saints and The Bible. The cathedral’s cornerstone was laid way back in 1211! All of it is very impressive.

Closer to our time, there is a Museum of the Surrender today, marking the location where the Germans signed the documents to end World War II in Europe. The building served as the headquarters for Supreme Allied Commander Dwight Eisenhower for the final months of the war. It’s address is 12 Rue de Franklin Roosevelt. There’s a lot of love for Americans all over France, especially in those cities directly impacted by the war.

Eisenhower picked a great town to celebrate a victory! Hell, maybe the best in the world.

Reims these days is known, most notably, as the heart of Champagne country. Bubbly is the reason most tourists visit today.

Beneath the city sits old Roman chalk and limestone mines that enjoy a perfectly constant cool temperature and humidity. And within those caves today sits most of the world’s supply of champagne, aging gracefully amid dark and graceful isolation.

Most of the world’s great champagne makers sit almost side by side in Reims above those caves, with billions (b-b-billion!) of dollars worth of champagne beneath them at any given moment.

Tourists can tour those caves today (well, not today per se amid the global economic meltdown; but hopefully again soon). Almost every champagne maker in Reims (if not all) offer tours of the caves that end with a sampling of their products in beautifully stocked tasting rooms.

It’s quite an experience. I’ve toured both Taittinger and G.H. Mumm, but there are many others. See a list of them here. You can easily book the tours online.

The Nazis of course confiscated much of France’s stash of famous wine during the war. They even had “weinfuehrers,” whose job it was to supply the Reich with France’s best bottles of wine. The French went to great lengths to hide as much as they could, but lost countless millions of bottles to the Nazis over the five years of occupation.

There’s a great book on the topic called “Wine and War” that I bought a couple years ago at Shakespeare and Company in Paris, probably the world’s most famous independent bookstore and a tourist attraction itself. Definitely worth the read for those of us interested in the nexus of military and culinary history in World War II.

With the French wine industry in shambles in 1945, especially around Champagne, one wonders if Eisenhower had a chance to toast the Nazi surrender with a bottle of bubbly.

The Reims tourism board has a great website with tons of information about visiting the city and discovering all of its history and culture: https://www.reims-tourism.com